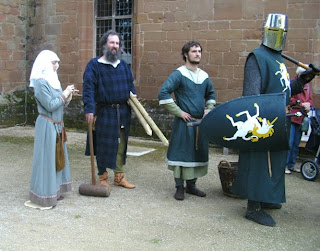 It's been a few weeks since I blogged, but I hope to get up and running again now (as you'll all have read, I've had some disruption with e-mails too, but the new address is on the right sidebar and I'll keep it there for a while).
I'm back from a research break/holiday in Yorkshire that I'll be blogging about soon, but first up I thought I'd ease myself back into blogging by posting about a recent re-enactment event at Kenilworth Castle for English Heritage. No pictures of me (probably a relief :-) ) because I was behind the camera taking the photographs.
As I often mention, I'm a member of Regia Anglorum re-enactment society www.regia.org Sometimes though, I go to play with friends in other societies, and this was one of those occasions when I went along as a guest member of Conquest, who do Norman, Angevin and Plantagenet Living History. http://www.angevin.org/
I love attending these events because I always find out things I didn't know.
Here's a picture gallery of show and tell - enjoy! You can enlarge any picture by clicking on it.

Talking to medieval surgeon Toby Whittey, I was fascinated to learn about the thread used as sutures for stitching 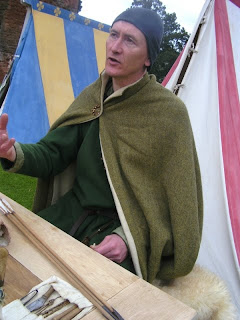 up wounds. Silk sometimes, but if that wasn't available, then horse-tail hair was the usual alternative, preferably from a stallion as apparently a stallion produces finer tail hair than a mare! Toby's stitching kit also included staples to hold the wound together while it was stitched, and goose feathers. The shafts of the goose feathers are used in cases where the doughty surgeon has to removed a barbed arrow from a wound. The quills are slipped onto the tines of the barb, thus minimising the damage as the arrow head is withdrawn.
Toby was also practising his trepanning skills with a tool copied from a 12thc treatise on medieval surgery - essential for men in the field struck on the skull and suffering from compression. It would be their one (slim) chance of survival. 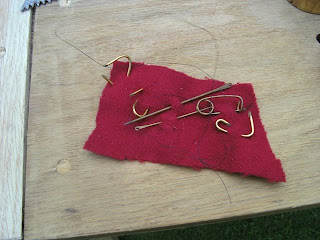 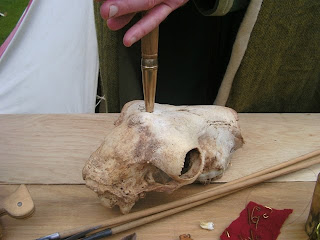 A spot of trepanning practice 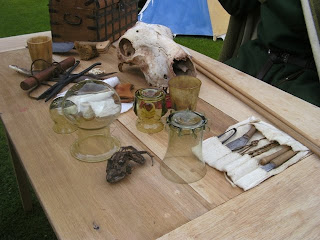 More tools of the trade. Love the
dried frog in the foreground!

Tony's display and demonstration were only part of the day's delights. There was also a wise woman displaying her crafts, a woodturner and a weaver. Authentic food was provided on both days, being assorted pies on day one, and a stuffed salmon baked in a salt crust on day two. Various nibbles such as gingerbread, cheese and seasonal fruits were also on the menu. 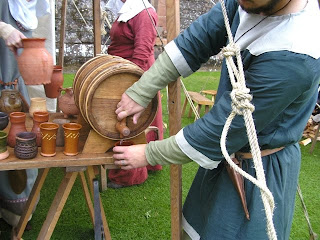 Something to drink... (would have been alcoholic back in the day, but modern men who are going on the battlefield are not permitted intoxicating brews for health and safety reasons!). 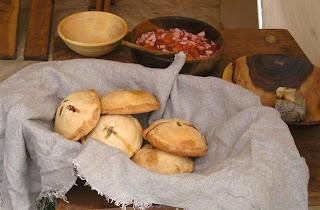 Pies and a plum and apple compote from the visitor's tent. 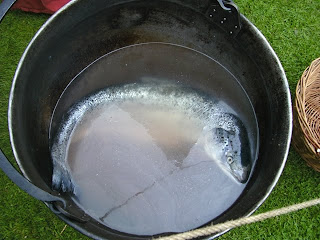 Fishy goings on. The Salmon awaits his salt crust cover. 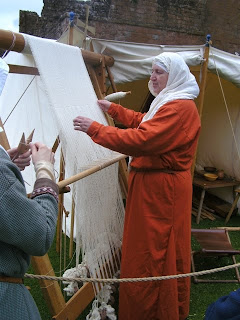 Weaving on a handloom. The end result
is going to be a tunic.
Click to enlarge 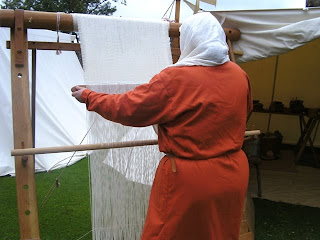 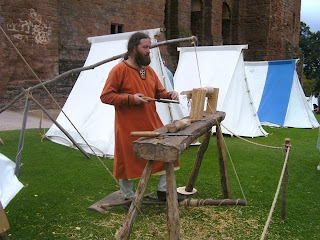 'Tigwald', busy at his wood turning with
the walls of Kenilworth Castle in
backdrop. 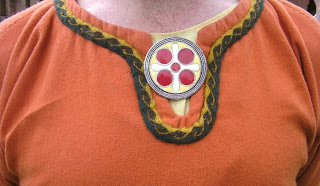 Tigwald's rather spiffy brooch. I love
seeing replica details like this in 3D
because the touch and feel add that
extra dimension when it comes to
the writing. Click on photo to enlarge. 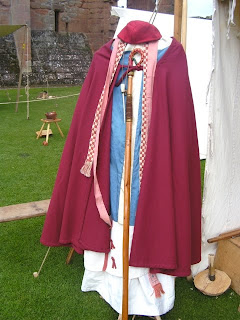 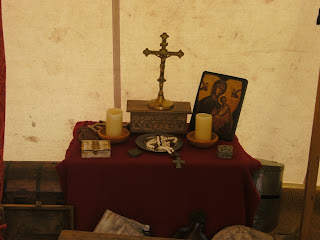 A baron's private devotional in his campaign tent. 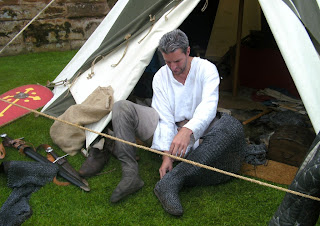 Preparing for battle. Where are the squires
when you need them? Probably at the
food tent! 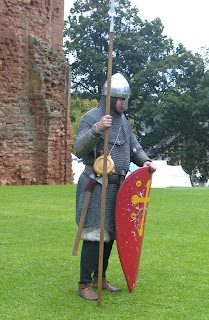 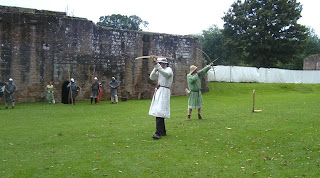 Bring on the archers - standard archer
and crossbowman. The latter apparently
were much feared because it didn't take
years of training. Half an hour and anyone
could kill a king - and one did at Chalus
Chabrol. The sniper weapon of the 12th
and 13thC

Posted by Elizabeth Chadwick at 00:48 8 comments:

I returned from holiday to find my e-mail account with BT had very messily died in my absence. Not being inclined (after two TRULY TERRIBLE experiences with BT's non UK call centres) to get them to fix things this time around I have done what needed doing long ago, and transferred elsewhere. This does mean though that for the past week I have been unable to read any incoming e-mails to my Elizabeth Chadwick account, and also that until I get things moved over, I won't be able to read incoming e-mails on my old account.
If anyone does want to get in touch with me, my new account address as of today (Saturday 12th September 2009) is elizabethchadwick@live.co.uk So sorry for any inconvenience, but believe me, this is sooooo much easier than going through the torturous circular rigmarole of a BT overseas call centre experience (shudder).

Once I've got my e-mail addy changed throughout Internet land, I'll be posting about a day out with Conquest and Regia Anglorum at Kenilworth Castle and then posting about my research visit to Yorkshire.

Anon and bear with me.
Elizabeth
Posted by Elizabeth Chadwick at 15:15 4 comments: