The other day while nattering on Facebook, I got talking about Ludgershall Castle, and thought I’d blog about it.
It’s pretty much a crumbled ruin now and takes some strong imagination to flesh out, but at one time, while never being a top ranking castle, it was favoured by royalty and it had its part to play in the war between Stephen and Matilda.
The castle, situated on open  chalkland towards the eastern edge of Salisbury Plain, stands on the main route from Andover to Devizes and Marlborough.
There has been a settlement at Ludgershall from Anglo Saxon times at least.  In 1015 it appears as a three hide holding under the name of Lutegaresheale in the will of the Aethling Aethelstan. By the time of the Domesday Book in 1086, it was in the hands of Edward of Salisbury, an Englishman who had (somehow) survived the Conquest and was the sheriff of the county.  He was William Marshal’s great grandfather and perhaps the first person to build a fortified residence at this prosperous manor which was worth six pounds and ten shillings at Domesday - an increase on its value from Edward the Confessor's day when it had only been worth £5.00
On Edward’s death, the manor and possible fortifications passed into the administration of  King Henry I who dated writs from there early in his reign.  By 1138 it was in the hands of the senior royal Marshal John FitzGilbert (hero of my novel A PLACE BEYOND COURAGE) and in 1141 it was the overnight refuge for Empress Matilda as she fled her enemies following the loss of Winchester.
John was known as a castle builder par excellence. ‘he built castles designed with wondrous skill, in places that best suited him – from which he proceeded to terrorise the countryside.’ says the pro Stephen chronicle the Gesta Stephani.  John was probably originally given Ludgershall by King Stephen together with the castle at Marlborough, which enabled John to dominate the Kennet Valley.  His main rival in the area was Patrick  of Salisbury whose family had once owned Ludgershall.  Patrick set out to lay siege to Ludgershall and take it from John,  but John got wind of the plot and pre-empted Patrick, ambushing him along the way and sending him packing in a vicious pitched battle. With the blades of their spears and lances they joined battle so savagely that neither side spared the other in the slightest.  There were losses, there were gains, many a man killed and maimed, many a brain spilled from skull, and many a gut trailing on the ground...that day was a very bitter one: Patrick of Salisbury lost his best companions.
In the end, Patrick and John came to an agreement whereby John divorced his wife, married Patrick’s sister, and got to keep Ludgershall.  Patrick was made an earl and the men became allies.
One gets a glimpse of the time of John Marshal from the finds report for the North Enclosure where the first tower was built.  Finds include scabbard chapes (the protective metal fitting on the base of a scabbard), arrow heads, spurs and javelin heads, knives and horseshoes.  There was also a stylus, decorated boxes, a pottery alembic, a book clasp, and a bone playing piece.


Following the death of John Marshal, the castle was taken over once more by the crown and held by Henry II, and then in 1189 was given to his son John, at that time Count of Mortain.  When Richard returned from crusade, Ludgershall was removed from John and taken into Richard’s care until his death from an arrow wound at the siege of Chalus.  John on becoming King, spent money on Ludgershall. He had the park repaired and two new kitchens built.  Repairs were made to the King’s chamber and to the tower.  In 1217-1222 it passed back into the hands of the Marshal family before being handed back to the crown. Henry III had considerable building work done to the castle.  A writ of 30th June 1241 states:
‘To the bailiff of Marlborough and Ludgershall, cause the queen’s chamber at Ludgershall over her bed, and the little wardrobe to be wainscoted; a porch to be made before the king’s chamber, to be 27 feet long and 18 feet deep.  The chapel of St. Nicholas to be whitened and roofed with shingles, a step to be made before the king’s great chamber, the windows to be barred with iron, and a small porch to be made before the door, and 3 windows to be made in the queen’s chamber.’
If John Marshal was quite the fearsome castle builder, Henry III was more of an interior decorator and domestic architect.  The above is only the tip of the iceberg!  Here’s another example
‘to make a gallery before the door of the queen’s chamber, and a covered passage from that door to the door of the hall; to paint the posts to imitate marble, and the story of Dives and Lazarus in the gable opposite the dais…


These were Ludgershall’s glory days!
The castle passed to successive queens Anne of Bohemia and Joan of Navarre – the gatehouse and tower were repaired during her ownership up to 1437. In 1453 it was in the hands of Edmund Tudor Earl of Richmond.  1464 saw it owned by George Duke of Clarence, but its upkeep was being neglected.  It was no longer any use as even a minor defensive castle. By the visit of John Leland in the 1540's Ludgershall was reported on as being ruinous.
Today it is kept under watching brief by English Heritage, and it's free to visit. There's not much to see now, but English Heritage has produced a book detailing the findings of the  archaeological dig conducted there between 1961 and 1972, complete with a short history of the castle in the context of the finds.  It's published by the Wiltshire and Natural History Society Monograph Series 2 edited by Peter Ellis.isbn 0 947723072 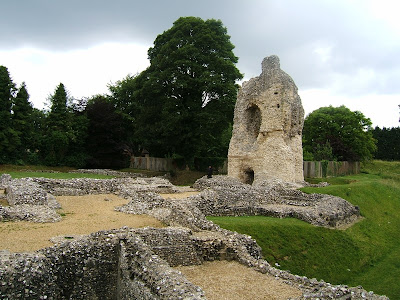 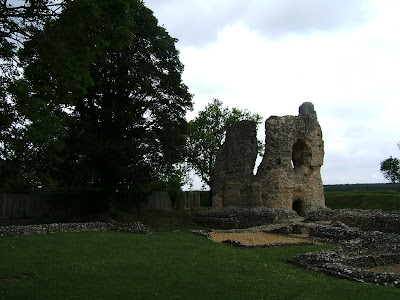 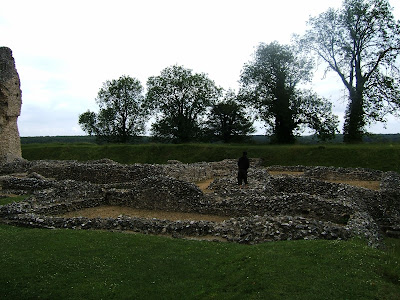 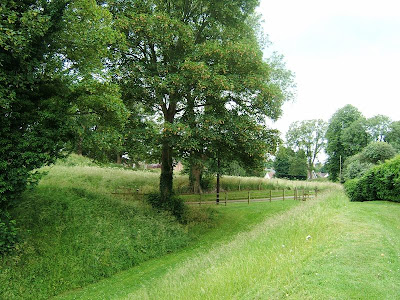 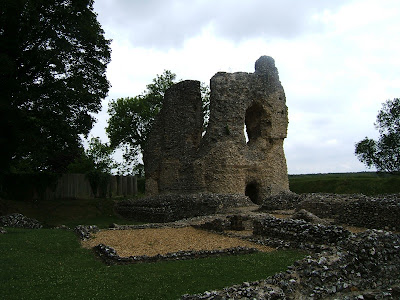 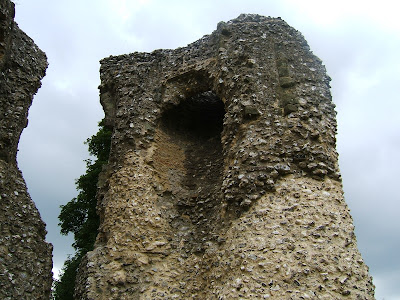 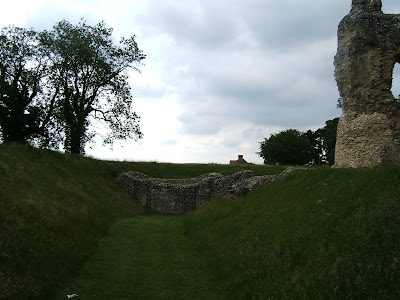 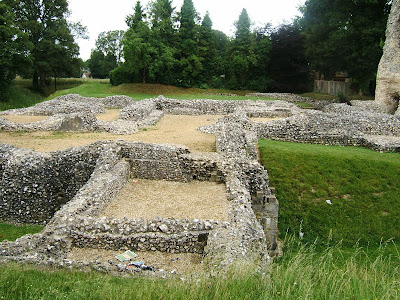 Posted by Elizabeth Chadwick at 12:23 8 comments: