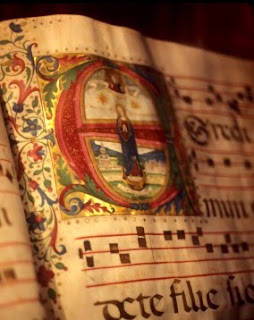 I was talking to author friend Helen Hollick about medieval names and cultural survival when we met for lunch recently and I said I had been meaning to list some of them as a Medieval Monday post. I have in my possession the Feet of Fines for Norfolk 1201-1215 and for Suffolk 1199-1214. It's a list of cases brought before judges on the travelling circuit at this time and much of it is concerned with property law and small business that gives us the names of the local populace. East Anglia was once part of the Danelaw and there are strong Scandinavian influences at work in this region, as well as Anglo Saxon and Norman. So let's see. Here is a list of names by origin dating to 150 years AFTER the Battle of Hastings. Names of Anglo Saxon and Scandinavian origins seem to be surviving in families at this point although from studying the data it becomes clear that many of the parents with Anglo Saxon and Scandinavian names are now giving their children Norman ones. So for example, Elfstan calls his son Richard, Gunnild calls her son Robert. Brictmar calls his son William. As the Middle Ages progresses, so does the increase in the popularity of certain names. By the early post medieval period, the names William and John accounted for 40% of all boys' names in Parish registers.
Since I don't have an Old English alphabet to hand on my keyboard, excuse the approximate spellings. The 'F' beside a name indicates a woman. Fewer women are involved in the lawsuits, and so there are corrrespondingly less names. Also some of the names go across the board - particularly biblical ones, and these are freqently given to men in holy orders. Whether these were their baptismal names, or taken on when they became clerics, I do not know at this stage.

MEDIEVAL MONDAY: William Marshal and a spot of Highway Robbery! 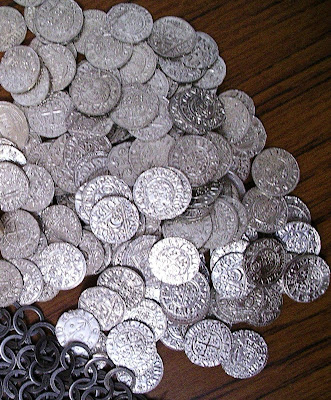 I gave a talk at Uppermill library in Saddleworth last week and one of my audience - Laura- said she particularly enjoyed my Medieval Monday posts. I admit to being a bit lax with these sometimes as I don't always have the time, but spurred on by her comment - thanks Laura :-) ! I have set out to post one today.
It's from volume 1 of the Histoire de Guillaume le Mareschal - the story of the great William Marshal's life - and it's a particular incident that happened to him while he was travelling and on his way back to Montmirail, to the Household of his liege lord The Young King. The dateline is circa 1182/3. It's not an incident I have put in The Greatest Knight, but you might find it in some of his biographies.
It tells us so much about the life and attitudes of the time. My comments are in bold.

The Marshal came to the lodgings and he ordered Eustace to make sure he did not disclose any of this business to any man. There is not much else to tell: the Marshal came to the lodgings and found Sir Baldwin who was more to him than a neighbour, and Hugh de Hamelincourt. They both hurried up to meet him, gave him a joyful welcome and cried out together: 'Marshal, your delay en route today has kept us fasting a very long time.'
'My lords,' he replied, 'never mind about that! I have won something of greater use to us, in which gladly I grant you a share. Eustace, over here with that money!'
Eustace was more than happy to oblige and threw it down on the ground in front of them. Being the wise man he was, the Marshal said: 'Take it to pay what we owe.'
They then asked: 'Marshal, where does this money come from?'
He answered: 'Be patient for a while, I shall not let you know just yet.'
Joyfully they ate and drank and, once they had left the table, all the coins were counted, for they thought that the man who had lent them him had miscounted. When the tally had been made, they found 48 pounds in good money; it was all there. The Marshal then said: 'Now I know that the lender was telling me the truth.' So he then began to tell the tale from beginning to end, the whole truth of it, as you have already heard me tell it.
When Sir Hugh heard it, I can tell you he was not best pleased. 'God's teeth, you were more than kind to them for even letting go their palfreys and baggage. Here, bring me my horse. By my faith, I want a word with them.'
The Marshal said: 'My dear lord, in God's name curb this anger of yours. You will hear no more of them from me, and you shall have no more of theirs.'

The moral of this story being that a monk who seeks to run off with someone's sister and live off usury is fair game to have his wherewithal to make a living taken. We might think the Marshal's actions harsh and opportunistic (accosting a stranger on the road, taking his money and dividing the dosh between his cronies!) but his colleagues thought he had not gone far enough and were ready to head out, find the couple and seize their horses and belongings too, although the Marshal prevented them. It's an interesting tale and shows that within the realms of chivalry, there were areas of tarnish on the armour to our modern way of thinking. To theirs, not so.
Posted by Elizabeth Chadwick at 12:59 7 comments:

FOR THE KING'S FAVOR GIVEAWAY: THE WINNERS 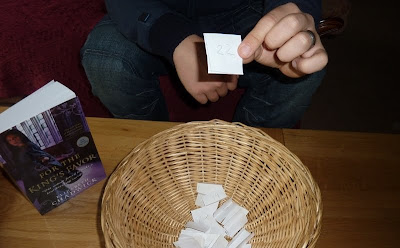 Okay, I got around to doing the giveaway draw this morning. I separated the entries into 3 piles - USA, Rest of the World and UK and allocated each one a number. So if you e-mailed first you were number 1, 2nd number 2 etc. Wrote all the numbers down on squares of paper and folded them into a basket. My eldest son dropped in with some shopping and stopped for a coffee, so I asked him to do the selecting.

Rest of the World Drawing - Laura Rodrigues from Brazil

I have Lisa's address, soI will post straight out, but if Cathy and Laura would like to e-mail me a forwarding address to elizabethchadwick@live.co.uk, I will get those sent out as soon as I can.

I will be running another giveaway for The Leopard Unleashed early in December. Congratulations to the winners and I wish I could have given everyone a book.

Elizabeth.
Posted by Elizabeth Chadwick at 15:11 No comments:

FOR THE KING'S FAVOR GIVEAWAY UPDATE

Hello all.
Just to say that the FOR THE KING'S FAVOR giveaway is now closed. I've been away on book tour and am only just home, so bear with me while I sort the entries into the 3 categories (USA, UK, Rest of the globe) and do a drawing. I'm having a writing catch up day tomorrow as I really need to get back on track with the new work, but I'll do the announcing on Sunday. I've got visitors coming, so I'll get one of them to do the choosing.
Anon
Elizabeth.
Posted by Elizabeth Chadwick at 17:25 No comments: