Fork Off!
(Dedicated to my father in law William Hicks 'Bill'  1922-2011, who always used a knife and spoon to eat his meals and thought forks were an affectation!) 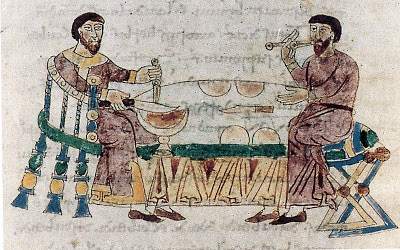 The first mention of fork use in the Middle Ages dates to the 11th century when a Greek princess called Theodora was sent to Venice to marry the Doge Domenico Selvo. Among the artefacts she brought with her was a fork which she used to eat meals. A disapproving chronicler tells us:  ‘She did not touch the food with her hands but had each dish cut into tiny pieces by her eunuchs, which she then advanced to her mouth using a sort of miniature golden spear with two prongs, and barely tasted.’ The Princess later died of a wasting disease and ecclesiast San Pier Damiani (1007-1072) thought this a just punishment for such a sin.
You will note the mention is of two prongs - forks looked more like mini pitchforks in the mediaeval period and thus had associations with the devil. Having said that, forks with more prongs are known according to Bee Wilson in her book on the history of culinary gadgetry “Consider the Fork” although she doesn't elaborate on her source, which would have been useful.
A century after Theodora's castigation, Pope Innocent III railed against people who set out elaborate tables when they dined. He accused them of vanity for adorning their tables with ‘decorated tablecloths, knives with  handles of ivory, golden drinking vessels, silver platters, with cups and beakers, bowls and basins, with soup plates and spoons, with forks and salt shakers etc. Basically he said what was the point.  You couldn't take any of it with you when you died and it wasn't going to promote your path to heaven.
The earliest appearance of the Fork in iconography can be dated to the Code Of Lombardic Law at the beginning of the 11th century which shows a couple of men eating at a table using knives and forks, although said forks look nothing like our modern notion.

The advancement of the Fork from Byzantium into Europe seems to have begun in Italy where it was discovered to be useful in the eating of  pasta. However elsewhere in Europe it had still to catch on. In 16th century France, satirist Thomas Artus, published a book called L’Isle des Hermaphrodites, which made fun of the effeminate ways of the court of King Henry IV of France. At that time, a hermaphrodite was an abusive term you might apply to anyone you didn't like. Artus, when mocking the courtiers says that ‘they never touch meat with their hands but with forks, whose prongs was so wide apart that the hermaphrodites spilled more broad beans and peas and they picked up, scattering them everywhere. They would rather touch their mouths with their little forked instruments than with their fingers.’
The ancestor of the modern fork was known in Europe from early times.  The Romans used prong-like instruments to winkle molluscs out of their shells, and to spear food.  The later medievals and Tudors used 'sucket' forks for eating sweetmeats that were preserved in syrup. Some early forks had a prong at one end for spearing the sweetmeat and a spoon at the other for dealing with the syrup. The fork ends of the sucket could also be used as a toothpick.  As aforementioned, the Italians began using forks to deal with their pasta, but by 1608, Elizabethan traveller Thomas Coryate noted that they were using them to hold their meat steady while they cut it up. When he returned to England, he continued using a fork himself to the great merriment of his friends who called him a 'furcifer' which means both 'fork-holder' and 'rascal.'  Elizabeth 1 owned sweetmeat forks but preferred to use her fingers, considering that forks were vulgar.

From the 17th century onwards, the fork gradually advanced as an eating tool, but even as the fashion grew, there was still a notion that they weren't for 'real men' and a bit suspect. By the 18thC  forks had become mostly respectable.
One of the reasons for the triumph of the fork was the introduction of china dinner plates.  When everyone had eaten out of wooden bowls, then a knife, spoon and the fingers were perfect for the job.  Try eating your dinner in a wooden bowl using a knife and fork - doesn't work very well.  But transfer to a plate and voila!
The way of using a knife and fork in tandem has come down to us from the 19thC.  Originally the fork was used to keep morsels of food stable while they were cut up.  Then the knife was laid down and the morsels conveyed to the mouth with the fork.  Another method developed from this whereby the knife and fork were held in the hand all the time.  Not only was the fork used as a stabiliser when cutting, it was also used so that the knife pushed the food onto the fork. In this method, knife and fork are used in tandem throughout the meal, and that's about where we are today - complete with our smaller jaws, apparently a partial product of the way we now use our cutlery!

Consider the Fork: A History of Invention in the Kitchen by Bee Wilson


Posted by Elizabeth Chadwick at 10:42 9 comments: