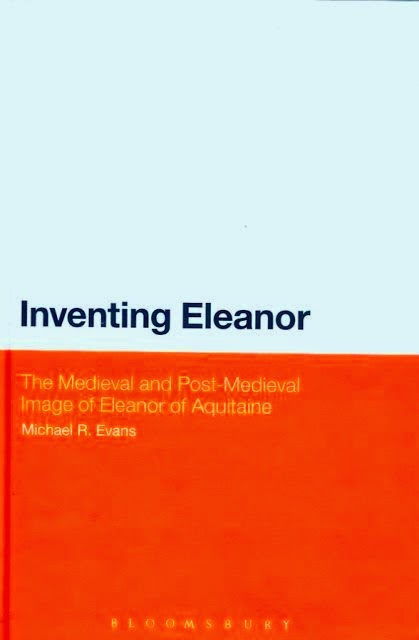 While browsing the Internet for research, I came across a reference to this book and feeling it would be a really useful addition to my shelves, I went ahead and bought it.
During my research into Eleanor of Aquitaine, I constantly come across misconceptions and false information in secondary sources including biographies. I also come across comments about Eleanor being a great feminist icon and a woman way ahead of her time, and then I want to bang my head on the desk (metaphorically speaking).  So it was great to come across a work that aims to set the record straight and that tells us just where these odd notions about Eleanor originate.

From the back of the book:
‘Eleanor of Aquitaine (1124- 1204) Queen of France and England and mother of two Kings has often been described as one of the most remarkable women of the Middle Ages. Yet her real achievements have been embellished - and even obscured - by myths that have grown up over eight centuries. This process began in her own lifetime, as chroniclers reported rumours of  scandalous conduct on crusade, and has continued ever since. She has been variously viewed as an adulterous queen, a monstrous mother and jealous murderess, but also was a patron of literature, champion of courtly love and proto-feminist defender of women’s rights. Inventing Eleanor interrogates the myths that have grown up around the figure of Eleanor of Aquitaine and investigates how and why historians and artists have invented an Eleanor who is very different from the 12th century queen. The book first considers the mediaeval primary sources  and then proceeds to trace the post-mediaeval development of the image of Eleanor, from demonic Queen to feminist icon, in historiography and the broader culture.’

This is exactly what the book does in a very readable form that still remains scholarly and detailed in its sources.   The contents include an introduction where the author sets out his reasons for writing the book and argues that she was ‘far from unique amongst 12th century royal and noble women.’ Professor Evans seeks to unravel how she acquired her reputation for exceptionalism. He remarks on the opening page  that Eleanor’s biographers must take some of the blame for this. ‘In the absence of hard evidence (these) biographies have often been fleshed out by speculation and the creation or perpetuation of myths.’ 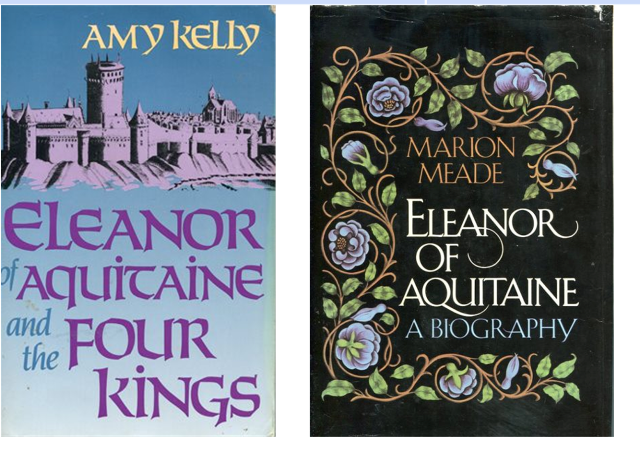 Following a detailed introduction, Professor Evans traces Eleanor’s reputation, through the blackening of her name during her own lifetime and the time soon after her death.  He explores too the legends surrounding Rosamond de Clifford and how both women’s reputations have suffered at the hands of myth and legend.
Chapter 2 looks at Eleanor in historiography and how realistically she is portrayed. He observes that ‘historians may have striven to create (in the words of Edmond-René Labande) ‘a realistic image of Eleanor of Aquitaine’, but that image has struggled to replace that of the more colourful meta-Eleanor in the public consciousness. Hence an online author in 2013 is still able to write of Eleanor in stereotypical terms that would have been familiar to a mid-19th-century readership of popular history.’  He goes on to explore the way in which Eleanor’s reputation has been distorted to suit the ideologies of particular historical periods and historians with axes to grind. So ‘In the late 20th century, second wave feminist movement gave birth to a new interest in Eleanor of Aquitaine as a female hero, but often at the expense of exaggerating her deeds and influence, and reinforcing the myth of her exceptionalism.’  He also explores Eleanor’s depiction as a new-age neopagan type!  He comes the conclusion that ‘historians of Eleanor have created an image of her, and mediaeval women as a whole, that is misleading.  My thoughts exactly.
The third chapter deals with Eleanor the woman of the South and very quickly puts paid to the notion of the original Eleanor as propitiating a great Southern cause.  He says that Eleanor is ‘arguably a northern as much as a  southern figure…It was Poitou, not the south-west that was the heartland of Eleanor’s realm and where the Dukes of Aquitaine held the greatest concentration of demesne lands.’  …. He also explores a suggestion from a recent set of essays about Eleanor that claims she  didn’t actually speak Occitan at all.  The courts of love and literary patronage are shown to be relatively insignificant in Eleanor’s life. He comes to the conclusion that Eleanor of Aquitaine ‘can in no way be considered a southern figure in an alien and hostile northern world. Her native duchy straddled the divide between the North and the South, and its main power centres were closer to Paris than to the Mediterranean.’  Bam, another dearly held myth bites the dust.
The next chapter deals with Eleanor’s portrayal in drama before 1900 and goes into great detail via Shakespeare, operas and sundry plays and dramas. From there it’s onto Eleanor in drama post-1900, and of course the iconic Lion in Winter. TV series such as Robin of Sherwood also receive a mention for how Eleanor is portrayed in cameo roles.
Professor Evans  then takes an overview of how Eleanor is portrayed in fiction and there is a fine accolade for author Sharon Kay Penman. Jean Plaidy’s take on Eleanor is discussed too and there are some ‘interesting’ quotes from Alison Weir’s the captive Queen.  There’s also a section on Eleanor in young adult fiction.

Then it’s onto Eleanor in the visual arts including mediaeval images. This was particularly interesting for me because Professor Evans discusses the mural at Chinon that is often said to portray Eleanor and Henry. Indeed many novels and biographies feature this portrait on the cover with the middle crown figure depicted as Eleanor. However, it ain’t necessarily so, and it seems,according to art historian Ursula Nielgen who has examined the work in detail and dated it to the late 12th century that the figures are all male and more likely to represent Henry II and his four sons. I was also pleased in this section to find that Evans had picked up my research on various biographer’s beliefs on Eleanor’s appearance and I receive a mention at the beginning of the chapter.

Having thoroughly explored Eleanor in the visual arts, right up to modern ‘headless’ covers in historical fiction, Professor Evans goes on to make his conclusion, which is basically that finding the real Eleanor remains an uphill struggle because of all the myths perpetuated. However, with continuing scholarship that doesn’t pander to these myths and stereotypes we may gradually begin to see a more nuanced Eleanor than of yore.
During his summary he remarked that while historians may shake their heads at the likes of certain recent works of historical fiction about Eleanor, ‘historical novelists such as Sharon Kay Penman and Elizabeth Chadwick are seeking to apply modern scholarship to their fiction, and consequently avoid the most egregious of the legends surround Eleanor.’  That’s nice!

Highly recommended for those who want to take a look under the surface and who are prepared with an open mind to have their perceptions and preconceptions challenged.

I would add that it is rather expensive - which seems to be the case with most academic books these days.
Posted by Elizabeth Chadwick at 21:00 5 comments: