A visit from the Deity! 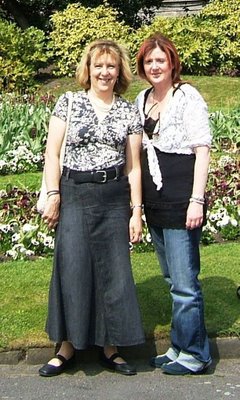 The 'Deity' as she is very fondly known by the members of the e-lists she owns, also goes by the name of Wendy Zollo. She not only runs my Yahoo reader list but is one of my best friends on the internet. I'm on the left, Wendy's on the right.
We met and got a taster of each other's personalities on lists dedicated to readers of Medieval fiction and to fans of Sharon Kay Penman. From there, we followed each other round other lists in cyber space, meeting other like-minded folk along the way, the majority of whom have stayed together and become great friends and offered each other mutual laughs, madness, entertainment, more serious support and shoulders to cry on. (speaking behind my hand, I promise that I won't mention the state of Thomas Becket's underwear...not once!). We hale from all parts of the known universe, united in a love of books, discussion, and respectful interest in the diversity of each other's culture.
Wendy and her husband Kevin came over to England for a late spring holiday and of course we just had to meet up. This is us in the grounds of Nottingham Castle (what's left of it).

We hit it off straight away and it was as if we'd known each other years. We started gossiping from the word go. I took Wendy and Kevin to Bromley House Library so I could change my books and show Wendy where I do my borrowing. http://www.independentlibraries.co.uk/nottingham.htm We went up the stairs in photo 1 - only 1 person allowed at a time due to delicacy of staircase! After that we went to the castle and had a wander around the grounds and the museum. Having refreshed ourselves with a cup of tea in the cafeteria and waited out a shower in the museum porch, we wandered down to Broadmarsh Centre and the caves of Nottingham for a guided tour. This was fascinating and had been upgraded since I visited a couple of years back. As it wasn't a busy part of the day, we even had the tour guide to ourselves! Wendy had to be different though and insisted on having a blue hard hat instead of a white one! http://www.aboutbritain.com/CavesOfNottingham.htm
Nottingham is built over a network of sandstone caves and the ones in Broadmarsh Centre contain 14thC Medieval tannery pits. There's also the remnants of a pub with an illegal gaming cellar, and World War II Air Raid shelters. Plus examples of Victorian slum housing. Fascinating.
Once back at my house, we had an English afternoon tea and yet more gossip! Kevin was very taken with the prize winning Colston Basset blue stilton cheese - Colston Basset being a nearby village. http://www.colstonbassettdairy.com/ourcheeses.html
'Stilton is rare in being protected by a trademark. Both the word Stilton and the Stilton Cheese Makers Association logo are certification trademarks. Recently, Stilton had also been registered as a Product of Designated Origin (or PDO) in the European Community. All these protections mean that the product can only be manufactured by licensed manufacturers in the three counties of Nottinghmashire, Leicestershire and Derbyshire. All manufacturers are independently inspected to guarantee that the cheese conforms to type.'
Kevin also sampled the delights of prize winning pork pies - made in a local village http://www.acclaimimages.com/_gallery/_pages/0182-0604-1412-5614.html and I introduced him and Wendy to the delights (or not!) of salad cream! http://www.englishteastore.com/hesacr15.html
Being as their hotel seemed a little off the beaten track, my husband Roger offered to show them where it was, so we went out for an evening drive in convoy, dog included. Which was great as far as it went, except that we managed to get lost and had to stop and ask some locals the directions! In mitigation, the road we should have come in on, had been closed and is now part of a nature reserve, so we had to take a detour. I'm sure Kevin thought we were mad! Anyway, all's well that ends well, and we finally found the hotel, otherwise Wendy and Kevin would have been sleeping on our lounge floor. At least there would have been stilton and scones for breakfast.
All in all a fabulous visit and we got on so well, I was sorry to see her leave. (shucks!) The house next door is for sale. Maybe she could come back and move in! Other than that, I'm sure it'll be business as usual in cyber space in a few days' time.

Posted by Elizabeth Chadwick at 20:51

It's good to meet someone whom you've got to know well on the Internet and find you get on just as well in person. Why is Wendy known as the "Deity"?

I met a wedge of Colston Bassett Blue Stilton recently but (this is probably sacrilege) I used most of it to make broccoli and stilton soup.

I love your account of meeting with Wendy and the picture is wonderful! I am so envious of your day together. We all must definitely get together sometime--imagine the damage we could all do if we were in one place!

Our local cheese shop here in sunny (!) East Anglia also stocks Colston Bassett, so it gets around :-)

Are the caves under Nottingham natural, or are they man-made, or a mixture of both?

Sarah,
Wendy is known as the Deity because we prefer it to 'listmom' and it's part of a list 'in-joke'. In kind of the way kids get nicknames at school, Wendy has become 'The Deity'. She's a goddess and she knows it (grin) Tammy will verify this and I am sure she is absolutely right about the damage potential of a gathering of the Penmanreview and Chadwick e-lists!
Cheese. I only like Blue Stilton in small quantities, but if I'm in the mood only Blue Stilton will do. It is wonderful for brocolli and stilton soup though. We have several creameries making it in the nearby villages. As well as Colston Basset, there's Long Clawson and and Cropwell Bishop in close proximity.
Interesting to hear that Colston Basset Stilton gets around the country Carla!
Re the caves of Nottingham. They are man made; cut from the sandstone on which Nottingham stands. The entire town centre is honeycombed beneath where people in past centuries have dug out cellars. Sometimes they've been knocked through and make quite decent sized tunnels. There are a couple of other cave systems that can be viewed in the city, other than the one I posted the url to. However they are by special arrangement and only open a few times a year. Caves were still being used as housing as late as the 1950's. There's one at Nottingham Castle called Mortimer's Hole - http://www.bbc.co.uk/nottingham/content/articles/2006/01/31/mortimers_hole_feature.shtml

"I promise that I won't mention the state of Thomas Becket's underwear..."

Did I miss a reference of some sort here...?

Arriterre,
The mention of the Becket undergarments was for members of Wendy's Sharon Kay Penman e-list. Many moons ago we had a group discussion about the Penman novel Time And Chance. One of the group members works in the world of Medieval academia and informed us that when Becket was undressed following his murder, his 'underpants' were found to be seething with maggots. For some reason that particular thread ran for a while, and mention of the detail is now notorious among the listmembers!