Back to my roots! 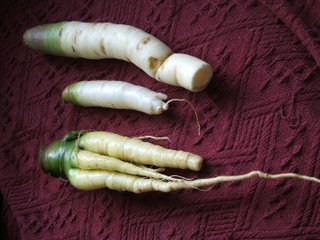 This is a photo of our first white carrots, planted earlier this year from a packet of heritage seeds.
Carrots in the early Medieval period were apparently this colour rather than the bright orange ones we see today which are a much later development - Dutch 17thC without looking it up, so don't quote me on that, but definitely not medieval. I cooked them this evening as on ordinary veg along with some standard orange carrots and the flavour was excellent. My husband, the grower, also assures me that the white carrots were more slug resistant than the orange. Now I've got my paws on the crop I'm going to embark on cooking some medieval recipes with them, including fritters and a stew in which the carrot goes in near the end along with crushed coriander seeds.
Ever since we've been married - 27 years now - we've always had an allottment and grown our own fruit and veg. Even when it wasn't fashionable to grow your own and be organic, we were. We're self sufficient for most of the year in potatoes, onions, garlic, carrots, beetroot, peas, parsnip, broccoli, beans (broad, runner and French), leeks, brussels sprouts and cabbage. We're also self sufficient in a wide variety of soft fruits - plums, cherries, raspberries, blackcurrants, redcurrants. We have two bramley apple trees, a golden delicious, a 'mystery tree' (husband can't remember but reckons it's a cox crossed with something else and the apple can be either an eater or a cooker) and a greengage. We grow tomatoes in the greenhouse, which also harbours a very productive grape vine. It's wonderful to have our own produce. We know what's gone on it and into it. The taste is fantastic when compared to supermarket fare and it's ecologically sound in terms of the travelling it does. Of course the picking and freezing makes for a lot of work, but once everything is frozen and stored, it's there for the use of throughout the year and all the slicing, podding and chopping makes a good occasion for family bonding sessions! Cultivating one's own produce definitely give one a feel for the rhythm of the seasons and keeps one in touch with the land and literally one's roots!

Posted by Elizabeth Chadwick at 23:48

Thanks for that interesting information about the carrots. I never knew they were white during the medieval period!

You have a greenhouse! We just moved into a new (to us) house in May and it has a greenhouse also. All our friends are so envious, yet we just stare at it in wonder because neither of us know anything about growing things. I think we might start simple - just try to grow some herbs. Right now the greenhouse is being used for storage.

You never cease to amaze me! The carrots looks a bit odd, but hey, it's not in the look but the flavor, right? We grew a few things last year but never got around to it this year. We had a few beans and a ton of green onions. Of course, now it's berry season. We have 7.5 acreas we're constantly picking from this week. One day we hauled in 11 pounds in an hour! What we can't make into preserves goes into the freezer. Lovely things, brambleberries! You and I might have to have a chat about this self-sufficiency thing!
~ Kemberlee

I wish I had some allottment and a greenhouse. I'm so tired of the EU standard fare where there's no difference between tomatoes and potatoes except the colour - no, it's definitely not the taste, both are of the snowball variant. ;) I grow my onw herbs on the balcony, though.

Verification word: qqiggxmi - sounds like a very odd sort of carrot, something the Spaniards got from the Aztects

Yes, carrots were bred to be orange because of the House of Orange.

During the Roman period they were purple or white. The Romans introduced this type of carrot into Britain. The native yellow carrot was fairly fiberous and tough. The Romans tended to use parsnips and carrots interchangeably.

sorry not to get back for a while on all the comments. Life continues at breakneck speed! I didn't know orange carrots were because of the House of Orange Michelle - you learn something every day.
I have to add re the greenhouse and everything that such things are my husband's hobby and expertise not mine. I just cook the stuff and leave all the soily/seedy/growing stuff to him. He's a natural nurturer :-)