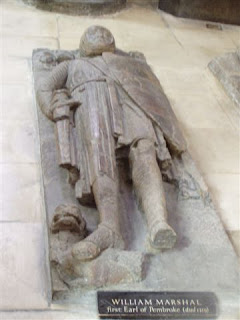 While I'm preparing a slightly longer blog, I thought it worth noting that the BBC programme Timewatch is returning in January with 6 documentaries and one of them is going to be about William Marshal. http://tinyurl.com/2asfqs It sounds as if it's going to be fascinating indeed. Stuart Mitchell, the academic consultant for the series says:
My personal highlights are the programmes on coastal wreckers of early 19th century popular myth and the biographical journey through the life of William Marshal - tournament champion and the greatest knight of the thirteenth century. He can accurately be referred to as the medieval David Beckham, not only because of his fame and stature but also because he was the subject of a big-money transfer deal!"
That's very interesting and leads me to wonder if the researchers have read The Greatest Knight? Back in 2005 in my author's note to the novel I compared William Marshal to David Beckham and mentioned transfer deals.
Posted by Elizabeth Chadwick at 10:15

can't wait to see the documentary, it would be great if they mentioned your book.

I think I need to order the BBC! Sounds like a great program. Do they ever put these programs out on DVD?

Great to hear that Timewatch is back soon. I always look out for it in the schedules.

If Stuart Mitchell did nick your David Beckham analogy, I hope you get a plug!