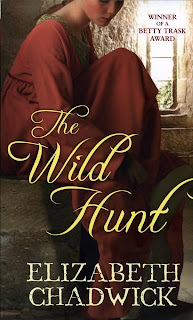 I have several blog posts to write of a historical nature but with Christmas suddenly appearing on the horizon (erk, where did that spring from?) and a bereavement in my husband's family, I thought I'd post a couple of less labour intensive posts to keep things ticking over. Early December saw the re-issue of my first ever published novel The Wild Hunt. It was published in 1990, having been picked off the slush pile by Carole Blake of the Blake Friedmann Literary Agency in London http://www.blakefriedmann.co.uk/ It went on to win a Betty Trask Award, which is an award in the UK for first novels of a romantic or traditional nature for young novelists under the age of 35 - which I was then. The award was presented by HRH the Prince of Wales at Westminster. Wow, what a start to a career, especially as previous to this I'd been stacking shelves in supermarkets to make ends meet.
The Wild Hunt is I guess what you'd call a romantic historical adventure novel. The relationship between the hero and heroine fairly to the fore and the protagonists are imaginary, although set against a solid enough historical background - the Welsh Marches of the eleventh Century. It has been sold to 16 countries and even now is still earning the royalties in far flung parts of the globe. For that reason, although I now write biographical fiction and am very into my Marshals and Bigods, I have tremendous fondness for Guyon and Judith, the hero and heroine of The Wild Hunt.
It's strange to think that when I began writing this novel, my strapping 22 year old was an infant of eighteen months! I can remember sitting in the foyer of a Bridlington guesthouse, notebook in hand, writing the opening chapter. Who knew it would lead to this. To celebrate the publication, I've made one of my youtube trailers - just a short one. See below. The 2008 edition of The Wild Hunt is an all-singing, all-dancing spiffy new version in that I've re-edited it, and in so doing deleted 15,000 words without losing any of the story. I guess I've learned to cut some of the verbiage
Posted by Elizabeth Chadwick at 23:23

Ha! Beat you to it. The Wild Hunt is on order for my Christmas pressy. (And The Time of Singing ditto for my birthday)

Bought it, read it, loved it.

Love the trailer. What is the beautiful music playing?