At an Akashic Records session a few months ago, John Marshal arrived to comment on Brian FitzCount's shoes.


Alison Laughing hard. John is in hysterics. John is finding Brian’s shoes very amusing. They’ve got turned up toes. Brian thinks he’s really the bee’s knees and John’s just in hysterics about it. It’s not even the shoes, it’s the way the shoes make Brian walk! It is funny. It’s a bit Max Wallish. That’s not really the funny thing as much as Brian thinking he looks sensational in these shoes.

For the Max wall walk go here http://www.youtube.com/watch?v=dqrKen5n_m8&feature=related and look from 1minute 03 onwards in the clip.

Shortly after this I bought a book at the British Library titled Medieval Dress and Fashion by Margaret Scott which is filled with fascinating detail about fashion from c 840 - 1570. My interest lies mainly in the 12th and 13th centuries so it was interesting to read up on the pertinent sections in this book.

A monk of Canterbury called Eadmer complained in his History of New Things in England that young men were growing their hair long like women, combing it often and nodding irreligeously as they walked around with delicate steps.

William of Malmsbury in the early 12thC says that there were gowns that left men's sides naked. Oderic Vitalis, writing around a similar time said that men's shirts and tunics were too long and tight but with wide, long sleeves. This mode of dress meant that men couldn't walk properly or do anything useful. Orderic also talks of shoes with pointed and curled toes like scorpion's tails. 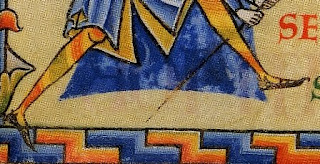 He says that the origins of these shoes were a design to hide the bunions on Fulk of Anjou's feet. He tells the tale of a clown called Robert at the court of William Rufus who stuffed the toes of his shoes with tow so that they could be curled back like a ram's horn, and because of that, he became nicknamed 'Horner.' 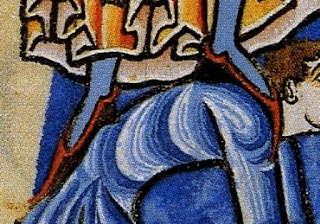 A Parisian theologian Master Pierre the Chanter (d 1197) attacked the fashions of his day. He slates the wearing of 'worms' excrement' (silk) and gold embroidered hems. He attacks the excessilve variety of colour in garments - red, green, yellow, violet, mixed and confused, and also complains about the way the colours were geometrically mixed up - bi-partite, tri-partite, quadripartite and smaller. It doesn't please him either the way the clothes are cut, torn, sewn up, tied up, opened up and tailed.

Alexander Neckham (Richard the Lionheart's milk brother) in his work 'The Nature of Things' remarked that a man was not considered a courtier unless he was gaudily dressed and that novelty clothes were a sign of status because they were so obviously new.

Here is Geoffrey de Vigeois on court fashions in France in the 12th C
'They have clothes fashioned of rich and precious stuffs, in colours to suit their humour. They snip out the cloth in rings and long slashes to show the lining beneath, and the borders of the clothes are cut into little balls and pointed tongues, so that they look like the devils in paintings. They slash their mantles, and their sleeves flow like those of hermits. Youths affect long hair and shoes with pointed toes.'

I wonder what they'd have made of the fashions on today's cat walks! 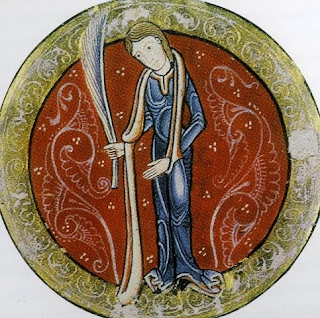 Is it a sleeve? Is it a scarf? 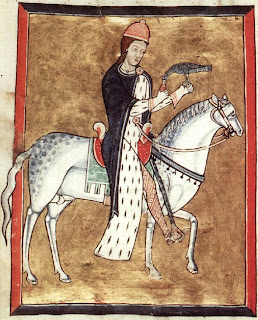 Must have been fun keeping an ermine robe like this clean!

Posted by Elizabeth Chadwick at 20:22

Maybe it's a sling!

I confess I've never thought of silk as "worm excrement"! LOL This sounds like a fun resource that I'd love.

Ha! In a few hundred years people are going to be looking at us and thinking how uncomfortable denim was etc!

Awesome!
I am always so happy when I come to see how humorous and cheerful paople you talk to on the "astral" still are.

Some things never change, and fashion absurdity is one of them. Great quotes.
I expect they'd be just as bemused/amused as we are at the steeple hennin :-)

I agree with Carla re fashion absurdity always being thus. I have read fashion histories from the Georgians on and the critics might well have come from your sources.

But focusing on men is a new one. Does that mean that women could get dolled up as much as they wanted and the critics didn't care? How fantastic (for me, anyhow) that History of New Things in England and other contemporary sources a] had standards in mind for men and b] examined men closely enough to be upset by what they found.