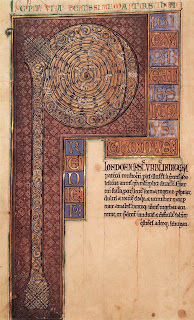 First of all to wish everyone a very Happy New Year. May 2011 be happy, healthy and prosperous!

I thought I'd have a look at the Anglo Saxon Chronicle, which charts the history of England and sometimes its neighbours from the year 1 to the year 1154 and see what it had to say about the year eleven in each century - or the nearest if eleven isn't involved. Let's see.

11. Herod Antipas received the kingdom in Judea - good for him. Not sure if it was good for anyone else!

343. (nearest) St Nicholas passed away. No more Santa (have I got the right one?)

410 (nearest) The Goths broke into Rome, and never since has a Roman ruled in Britain. In all they ruled for four hundred and seventy years since Gaius Julius first sought out that island. - The end of civilisation then.

514 (2nd nearest) 'The West Saxons came into Britain with three ships to the place called Cerdicesora. Stuf and Wihtgar fought with the Britons and put them to flight.' Hmm, so his wife was always asking 'Where's my Stuf?'

611 Cynegils received the kingdom in Wessex, and held it for thirty one years. Settling down and being responsible now.

710 (nearest) Acca, Wilfrid's chaplain, received the bishopric which he had held. The same year, ealdorman Beorhtfrith fought with the Picts between the Avon and the Carron. Ine and Nun, his kinsman, fought with Geraint, the Welsh king. The same year Sygbald was killed. Beating up the neighbours as usual.

809 (nearest) The sun darkened at the beginning of the fifth hour of the day on Tuesday July 16th, the 29th day of the moon.

911, Aethelred, lord of the Mercians died; and King Edward received the boroughs of London and Oxford, with all the lands that belonged to them.

1011. Suddenly we've got a garrulous monk and Viking problems.
The king and his counsellors sent to the force and entreated peace, promised them tribute and provisions on the condition that they stop their ravaging. They had by then overrun i. East Anglia, ii Essex, iii Middlesex, iv Oxfordshire, v Cambridgeshire, vi Hertfordshire, vii Buckinghamshire, viii Bedfordshire, ix half Huntingdonshire, x much of Northamptonshire, all Kent, Sussex, Hastings, Surrey, Berkshire, Hampshire, and much of Wiltshire.
All this unhappiness befell us through bad counsel, that tribute was not promised them in time, nor were they withstood; but when they had done the most evil, men made truce and treaty with them. Nonetheless, for all this truce, treaty and tribute, they went everywhere in raiding bands, and plundered and killed our wretched folk. In this year between the Nativity of St. Mary and Michaelmas, they besieged Canterbury, and got in by deceit, because Aelmar, whose life Archbishop Aelfheah had saved, betrayed Canterbury to them. There they seized Archbishop Aelfheah, Aelfword the king's reeve, abbot Leofwine, bishop Godwine - and abbot Aelmaer they let go. Inside, they seized all the people in holy orders, men and women - it is impossible to say how many people that was - and stayed in that town as long as they wished. When they had explored the borough completely, they went to the ships and took the Archbishop with them. Then he was captive who had been England's head, and Christendom's, until the time they martyred him.

1111. King Henry did not bear his crown at Christmas, nor Easter, nor Pentecost, and in August he fared over the sea to Normandy because of hostility against him on some of the borders of France, and mostly because of the eorl of Anjou, who held Maine against him. After he came there, many fierce raids, burnings and ravagings they did between them.
This year passed away eorl Robert of Flanders, and his son Baldwin succeeded thereto.
This year, there was a very long winter, a heavy time and severe; through that the earth-crops were greatly spoiled, and there was the most death among livestock that anyone could remember.

The above series of extracts taken at approximately 100 year intervals kind of makes you glad to be living now and not then... But nothing really changes does it?

Once more
HAPPY NEW YEAR!
P.S. the illustrations is from a life of Thomas Becket, but it looks the part!

Posted by Elizabeth Chadwick at 20:50