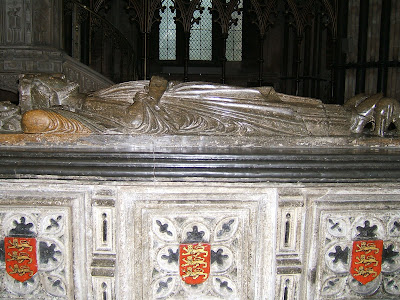 Today's samples of Medieval work in translation are a couple of letters from the patent rolls in the Tower of London pertaining to King John. In my novels where John makes his appearance, I have often described him as the kind of man who found it more interesting to dig tunnels than walk in a straight line on the surface.

The below are letters of John's concerning countersigns in secret embassies.
The King &c. to Robert de Vipont, greeting.
If Guido de Castellon will find you such security as we elsewhere signified to you by letter, then cause him to be liberated by this countersign: namely we commend you not to liberate him unless we should send Thomas de Burgh to you; we send you, however, in the stead of the same Thomas, our beloved and faithful Peter de Rupibus, our Treasurer of Poitou, and ye may undoubtingly credit him in this business. Witness ourself at Verneuil on the 26th day of September. By Peter de Rupibus (AD 1201).

Here's another one. Except John got in a muddle because he'd forgotten to whom he had given instructions!
The King &C. to Hubert de Burgh, his Chamberlain and Peter de Stokes &c. We command you to allow William Baudud clerk to speak with Geoffrey de Lusignan, through Thomas the clerk of our chamber, by this countersign; namely that we enjoined you, to believe nothing whatsoever, unless we should signify it to you by one of those three persons of our household whom we named to you; and we believe the same Thomas to be one of those three; and should he not be one of them, yet, nevertheless we desire that through him the aforesaid William Baudud the clerk may for the present speak to the said Geoffrey. And because we do not well recollect who those three were, inform us thereupon, that another time we may with more certainty give you our commands; for we truly wish that he may see him, and converse with him.
And if the aforesaid Geoffrey be willing to follow, in all things, the agreement made between us and the Viscount of Thouars, a transcript of which we send to you, then we will that he be released from fetters and partially put in ring-chains. Witness ourself at Chinon on the 26th August.

I'll be publishing more from the patent rolls on other Medieval Mondays since they are a mine of information about the life of King John, the political, the social and the domestic. Here's just another small glimpse. Different this time. It's a list of what was being recieved into his treasury and it's dated December 9th, so not far off our own season.
Teste 9th December at Clarendon. Know that on the Saturday next after the feast of Saint Nicholas (8thDec) in the 9th year of our reign, we received at Clarendon our great crown which came from Germany &c.

Of course we no longer know what that crown looked like or what happened to it. Bottom of the Wash? Now there's a thought!

Don't forget, my blog contest below is still open until mid-day Christmas Eve!

Posted by Elizabeth Chadwick at 10:39

Ooooh, gorgeous!
Thanks for that!
I love your Medieval Mondays and I love King John!
(And I think I am quite alone with the latter...)
Should you be interested - here's King John how I see him when I "go back in time and memory": http://ashmodiel.blogspot.com/2008/12/john-plantagenet.html
I drew him a year ago. :-)

That's a pretty photo of John's tomb. I visited him in 2004 and sent up a prayer for him. The gift shop volunteers seemed fond of him: perhaps he's been quiet, courteous, and well-behaved all these years.

I can't say I exactly "love" King John. I consider him, from what I know about him that's reasonably reliable, sort of a "tortured soul". He had a bunch of personality flaws, but also some good qualities which he never totally put to use, and his flaws caused him to alienate some important people, who, unfortunately, also were patrons of the monasteries and monastics who wrote unfavorable things about him. OTOH, he is certainly a fascinating character! BTW, part of his problem may have been that he could have been bipolar(which would have caused him to be quite erratic about a lot of things, and alienate important people). This, however, is just a guess on my part.
Anne G

Thanks for that! I love John also and with all my heart. And I could write a book now why I feel that way about him...and a whole essay what he was like actually besides what everyone thinks...but I guess that would be too much for now.
Thanks so much for doing this...I will put it to my research list. What you do is really gold!

Nice picture of John's tomb. I was planning to go and see it today as I had to drive north and could have made a stop in Worcester, but the weather turned out to be so appalling I couldn't manage it.

Those letters are fascinating. I have to say I feel sorry for the people who were expected to keep track of John's countersigns, when he couldn't himself.

Ashmodai, I like your picture! Wish I could draw.

Oh my goodness, what convoluted letters! I think I've had similiar from the tax office in the past!

Thanks for putting these up though - they really give an insight into the man, even if they are 'formal' documents. I have a great fondness for John too, mainly because I find his personality so fascinating and complex.