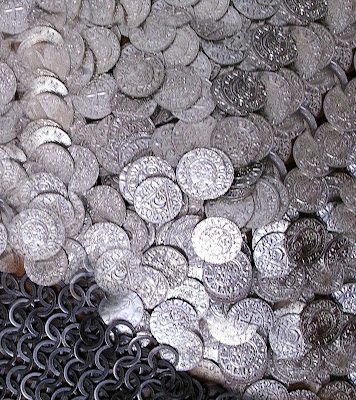 For today's Medieval Monday, I have
gone to the Anglo Saxon Chronicle for the year 1125. Here is a cheery little Christmas story for everyone, and with last year's financial difficulties and disgraces in mind, this is how Henry the First dealt with his money men when they weren't quite honest.

1125: "King Henry sent before Christmas from Normandy to England, and bade that all the moneyers in England should be deprived of their limbs, each one of the right hand and the testicles below; that was because the man who had a pound could not buy with it a pennyworth at a market. Bishop Roger of Salisbury sent all over England, and bade them all that they should come to Winchester at Christmas. When they came hither, they were seized one by one, and each one deprived of the right hand and the testicles below. All this was done within the Twelvenight, and it was all with great justice, because they had ruined all the land with great fraud; they bought all that dearly...."
Bring back the good old days eh? :-) Merrie Christmas!
Posted by Elizabeth Chadwick at 17:20

oh my!!! what a way to deal with them in applying "justice" (he-he) I just love your Medieval-Mondays, thanks EC for taking the time.

"On the eleventh day of Christmas, my true love gave to me, 11 lords a-leaping..."

You're right about the moneyers of today. For all the grief, pensions, lifestyles and even LIVES they've cost, they deserve this sort of penalty. It would be quite the deterrent! :)

Indeed! Perhaps they would think twice before committing fraud and ruining the economy!

I am reminded of what the "stocks" were orignaly! lol
It was crimanals who were sent to them not everyone! maybe we should send the bankers to the orginal stocks today!?

I believe a swift & just punishment policy would work today as a deterrent (sp?). I think the problem would be the liberals crying for the poor perp though :)

Ewwww....
I didn't know that.
Thanks for sharing.

My husband thought it wasn't a bad way to deal with those who, though their greed, have made live so much more difficult for so many of us.

No group more deserving of this "treatment" than the current corruptocrats in Washington, DC these days.