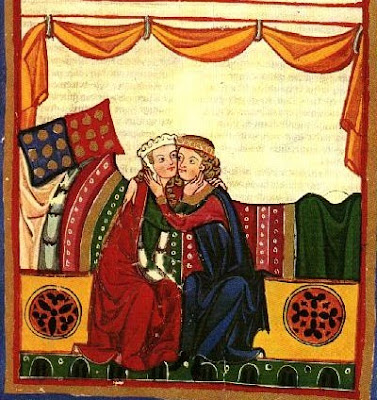 I'm slowly preparing a post on Adeliza of Louvain who shares the credits with Empress Matilda in my work in progress. For now here is my usual Medieval Monday post. It's taken from the The Treatise on the Laws and Customs of the Realm of England Commonly called Glanvill was written circa 1187 by an unknown man learned in the law of the land and the practices of the exchequer. It takes the form of a question and answer session between a master and pupil and is utterly fascinating. Look out for more quotes from this work in future Medieval Mondays.
Here's one showing that Normans and English in the higher echelons anyway, were getting it together.

Pupil: Does the secret death of an Englishman, like that of a Norman give rise to a murder fine?' Master: It did not do so originally, as I have told you. But nowadays, when English and Normans live close together and marry and give in marriage to each other, the nations are so mixed that it can scarcely be decided (I mean in the case of the freemen) who is of English birth and who of Norman; except of course, the villeins who cannot alter their condition without the leave of their masters. For that reason, whoever is found slain nowadays, the murder-fine is exacted, except in cases where there is definite proof of the servile condition of the victim.
Posted by Elizabeth Chadwick at 11:34

That's what I thought, Jan! Although the community, upon whom it was incumbent to pay the fine would probably be thinking 'phew!' if the victim was a lowly native, because they didn't have to cough up any money!

I believe by the time Glanvill wrote the treatise, the stuff about "English" and "Normans" "mixing it up" was very likely true, from what I've read. Also, by that time, the "murdrum fine" was more or less a way of extracting extra money out of "hundreds" where a murder happened, though the law "proving" that the victim was English was still on the books. But if "everybody was kind of mixed up"(at least everybody who wasn't a villein), then that wold have been a bit hard to prove. . . Of course, earlier, it was a different story.
Anne G

I've just given you an award at The Misadventures of Moppet: