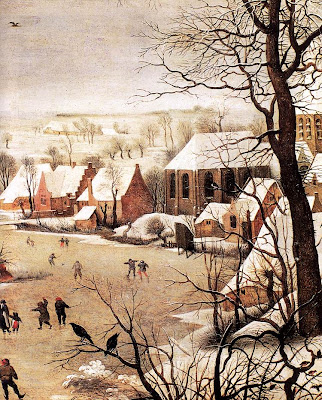 Today's translation piece for Medieval Monday comes from William FitzStephen's description of Norman London, written some time before the year 1183. FitzStephen was an intimate of Thomas Becket and a witness to his murder. His description of London is part of an introduction to his biography of Becket.

The UK weather being what it is just now, I thought I'd select an upbeat piece on what Londoners would have been doing 900 years ago.
The Illustration isn't winter London, but serves as motif and I like the atmosphere. It's from a painting by Pieter Bruegel the Elder titled Winter Landscape with Skaters and a Bird Trap.

"In winter on almost every feast day before dinner either foaming boars and hogs, armed with tusks lightning swift, themselves soon to be bacon, fight for their lives, or fat bulls with butting horns, or huge bears, do combat to the death against hounds let loose upon them.

When the great marsh that washes the Northern walls of the City is frozen, dense throngs of youths go forth to disport themselves upon the ice. Some gathering speed by a run, glide sidelong, with feet set well apart, over a vast space of ice. Others make themselves seats of ice like millstones and are dragged along by a number who run before them holding hands. Sometimes they slip owing to the greatness of their speed and fall, every one of them, upon their faces. Others there are, more skilled to sport upon the ice, who fit to their feet the shinbones of beasts, lashing them beneath their ankles, and with iron-shod poles in their hands they strike ever and anon against the ice and are borne along swift as a bird in flight or a bolt shot from a mangonel. But sometimes two by agreement run one against the other from a great distance and, raising their poles, strike one another. One or both fall, not without bodily hurt, since on falling they are borne a long way in opposite directions by the force of their own motion; and wherever the ice touches the head, it scrapes and skins it entirely. Often he that falls breaks shin or arm, if he fall upon it." 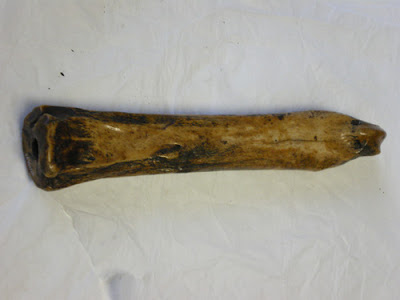 Bone ice skate from the Museum of London.
Posted by Elizabeth Chadwick at 11:52

Interesting stuff. Thanks for posting!

I love the Bruegel family of painters, particularly Pieter's winter scenes because of all the detail he includes...Not just daily work and play, but the atmosphere and animals, etc. Thank you for adding FitzStephen's description. It adds much to a sense of medieval time and place.

Very interesting.
And I wish I could get my hands on this Becket biography.

Nice to know that snow was a matter for playing in/on - even then. That 'ice-jousting' sounded a bit dangerous though! I've always been fascinated by reports from later (17th C I think) of the Thames icing over so much that they held fairs on it. I don't think that what we are experiencing now is anything like that, thank goodness.

Great MM Blog picturing a winter aboutb 900yrs ago...wow!! And thanks for including the ice skating bone picture.

He had a gift for description, didn't he? I love the great marsh that washes the Northern walls of the City and dense throngs of youths

People in Seattle, Washington, US of A do much the same thing when it gets cold enough here(which it sometimes does; it did last December), for small lakes and ponds to freeze over. They don't generally skate on them; we're not used to that kind of cold weather in the winter. However, people get creative about going to work in those conditions. I've seen people cross-country skiing around here in such conditions. Medieval people sound as if they were equally creative about these things. I'd love, for example, to have a time machine so I could go back to medieval England and watch the snowball fights!
Anne G

"dense throngs of youths go forth to disport themselves upon the ice. Some gathering speed by a run, glide sidelong, with feet set well apart, over a vast space of ice." Things don't change much really do they - sounds just like the youths of today!