THE ANATOMY OF A BOOK COVER. 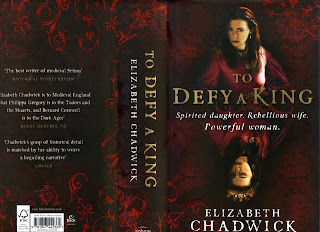 As competition for readers in the book buying market becomes increasingly stiff, the cover of a book has never been more important as a means of wooing the bookseller, supermarket buyer and the reader at first glance.

A book cover needs to sell the story, to place the book within its genre so it’s immediately recogniseable. It needs to give an intimation of what the book’s about. To make that all important connection between eye and hand so that a reader is drawn to pick it up in the first place. And for that to happen, it needs to stand out from the crowd of other covers all trying to do the same thing, but it also has to remain within parameters that readers will recognise. Basically the same but different! 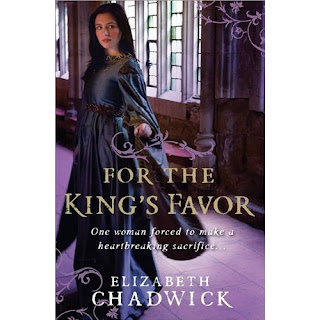 Sourcebooks jacket for
FOR THE KING'S FAVOR
September 2010

Posted by Elizabeth Chadwick at 17:58

I personally love the cover of To Defy A King, the colors and double-head character are very appealing. I like the your other cover as well, so glad that we have moved on from headless women ;)

I wish I knew who is was at Goodreads who started the "Dude, where's my forehead?" list, but hats off to him :)

Thanks for posting how the cover came about. Is. It. May. Yet. as well as Stop. The. Damn. Volcano. so the mail can get out in May.

I just love this cover and I can't wait to get my little hands on it! If that volcano delays my copy, I may have to go give it a piece of my mind!! The process for designing a cover sounds fascinating and definately is a lot more work than it would seem.

Fabulous. And really interesting too.

Fascinating post. I think the result is very compelling - it's one of the best book covers I've seen lately.

I'm glad the half-headless model is going away. I never liked it--I want to see a person, not a statue. And thanks to you for helping the trend die a deserved death.

Your book covers are beautiful. I wish more were like them.

Thanks for this wonderfully informative post. I love all of your book covers - and the half headed look is definitely old news.

Covers. A sore point. All I can say - how I envy you! I seem to be cursed with awful covers: the Purple Puke for UK bookclubs & St Martins editions of The Kingmaking was the worst - I was told there had to be a woman on the front otherwise women would not read it. (!?)
The latest idea....? Will just have to wait and see I suppose.
One day I might get something as lovely as yours... not holding my breath (although the Sea Witch Series is being re-designed, & the rough is looking good....)

Historical indeed needs something to say "historical fiction" not romantic fantasy - and should appeal to male and female readers. Something too romantic looking will not, I think, be picked up by men.
Sighs in frustration.

I really, really, dislike those headless women(or men, for that matter). I'm glad you decided to have a woman with a face! Your model really does draw you to the book, and I can't wait to see it come out!

Helen, I agree with you completely. Problem is, I don't think publishers even now, really know what to do with historical fiction. It makes me shudder to think what my "hybrid" historical/romantic science fiction trilogy will end up looking like. When I get to that point, I'm going to have to do my best to breathe down their necks, and hope for the bes.

Thanks for the comments so far all!
Helen, I know you've had some problems with covers - as have I in some cases. I hope the cover fairy will smile on you some day soon!
I am really pleased with this one but even so, I do realise that male readers might pass it by. The best ever cover for all bases was The Greatest Knight. I really think A Place Beyond Courage ought to be repackaged that way too. But for the career ongoing, this new look is the way to go at the moment.

I love the richness of this cover and the suggestion of texture. As a novice to covers it was fascinating to read about the process behind promoting the work of an best-selling novelist.

I think men will be drawn to this cover OK - it states clearly that it is historical fiction, I think men get put off by romancy-looking covers, yours is far from that as its bold and vibrant. I agree with you about Greatest Knight - fantastic outside fantastic inside!
For the original Pendragon's Banner we decided on Glastonbury Tor, the lake and Somerset levels. The design that arrived would have fitted the Snowdonian Mountains. I had to point out that Somerset doesn't have mountains.... Harold the King also had mountains. Very fitting for the Earl of East Anglia /Wessex (both noted for lack of mountains) says she with a sigh.
Interesting how UK & US differ in ideas for covers though.

Loved the interesting post about book covers. My favorite of yours is A Time of Singing, but I love green. This discussion comes at a perfect time. I just got the cover for The Tapestry Shop (October release). When they work out beautifully, it's better than a new contract!

It must be a great cover, because I'm immediately drawn to buy it!

This was a fascinating insight into the many steps that go into creating a cover. I'm very glad you had a vision and the input to see it come to light. I sincerely hope this starts its own new trend - or at last opens up some variations in covers. It still says 'historical novel', but does evoke images of a movie poster. Hmmm, Hollywood, are you watching?

I adore this cover and I will be so interested to see what influence it has on other books!