THE SUMMER QUEEN: Behind the Scenes part 5: Scandalous Ancestors 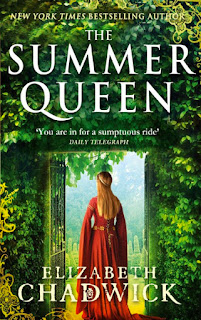 
Alienor has a reputation dwelt on by her biographers for coming from a family laden with dysfunctional characters whose lives were rife with shocking scandals. People will sometimes say ‘It’s no wonder she turned out as she did with ancestors like that.’  Actually I think she turned out rather well against the odds, and while everyone looks to her ‘interesting’ family relationships, no-one ever pauses to examine Louis’ ancestors in the same way.  I also wonder how out of the ordinary her family experiences were for everyday aristocratic experience in the 12th century.  When you begin looking, everyone has entire racks of skeletons rattling in their cupboards!

Alienor’s paternal grandfather had a lively past.  William IX Duke of Aquitaine, was a man with an aptitude for poetry, some of it crude and bawdy, (however, one has to remember that crude and bawdy poetry was a cultural norm of the time and would have been less shocking then, than it is now) and a huge  appetite for life in all its guises.

His first wife was Ermengarde, daughter of Count Fulke IV of  Anjou, but that marriage was dissolved after four years and was without children.  William moved on to pastures new and in 1094  married Philippa, daughter and heir of count William IV of Toulouse by whom he had several children, including two boys – William and Raymond, and five daughters.   Four years into his marriage with Philippa, the couple seized Toulouse, which Philippa regarded as her birthright, and to which her grand daughter Alienor would continue to press a claim in her turn.   Threatened with excommunication for such an act, William went on crusade in expiation.  To do so, he had to mortgage Toulouse back to the son of the man he had taken it from – which proved an unwise move and led to him and Philippa once more losing Toulouse.
Duchess Philippa persuaded her husband to give some land in northern Poitou on which to found a religious community dedicated to the Virgin Mary.  This was to become the famous Fontevraud Abbey which would later be the resting place of Alienor of Aquitaine, her second husband Henry II and their son Richard I.

William managed to fall foul of the church on a couple of occasions, the first time for tax evasion, the second time for abducting the wife of his vassal the count of Chatelleraut. The lady  went by the name of Amaberge or something similar, but came to be known as Dangereuse – for reasons that history does not disclose.   William brought her to Poitiers and installed her in an apartment built for her that came to be known as the Maubergeonne Tower.   Philippa  protested at his behaviour and complained to the church. When a bishop demanded that William give up his mistress, William replied that hair would grow on the priest’s bald pate before he gave up Dangereuse.

Philippa retired to Fontevraud, there to fulminate with Ermengarde, William’s first wife, about William’s scurrilous behaviour. (Ermengarde was then lodging at Fontevraud).
Dangereuse had a daughter, Aenor, from her union with her cuckolded husband, Aimery of Rochefoucaud.   A marriage was arranged between Aenor and Duke William’s heir and namesake, William.  What the children thought of their parents’ liaison isn’t known.  Did William side with his mother?  Did Aenor feel for her father?  We’ll never know how this dynamic worked out, or how William X and Aenor felt about each other, although they did their duty and produced three children,  Alienor, Petronella, and William Aigret,
Alienor, born in 1124, was only about two years old when her notorious, poetry-writing  grandfather died.  How much influence he had on his little granddaughter we don’t know. Also there is no indication as to when Dangereuse died and we don’t know how much contact she had with her.

Whatever the unknown details, the ones we do know – adulterous grandparents, one of whom was excommunicated twice and was in the habit of writing sexually and scatalogically explicit verse – have served to colour Alienor’s own reputation down the years.  She must have had the potential for being flighty and up to no good with grandparents like that, some would say.

But wait a minute.  What of her first husband’s background?  What of the relatives of Louis VII, nick-named in later years Louis the Pious.  Let’s have a look:

It all starts out well with his grandfather Philip, who married one Bertha, daughter of the count of Holland.  With Bertha he had 5 children, including Louis’ father, the future Louis VI.  However, then the cracks begin to open up.  Philip cast his eye upon a lady called Bertrade de Montfort, who unfortunately happened at the time  to be married Count Fulk IV of Anjou (who had already been married several times himself, and was working his way through  an assortment of wives).  The chronicler John of Marmoutier said of the match and Bertrade  “The lecherous Fulk then fell passionately in love with the sister of Amaury de Montfort, whom no good man ever praised save for her beauty.”  Right.

Claiming that Bertha his first wife was too fat, Philip dumped her and abducted and bigamously married Bertrade instead, for which he was excommunicated, first by the Archbishop of Lyon, and then by Pope Urban.  The ban was lifted on several occasions when Philip promised that he would put Bertrade aside, but it was all empty sincerity.  Rather like William IX’s comment that hair would grow on a bald prelate’s head before he gave up Dangereuse de Chatelleraut,  so Philip was too attached to the woman he had snatched from the Count of Anjou, to let excommunication get in the way of the relationship. Eventually the church gave up.

Orderic Vitalis says of Bertrade that she was keen for one of the two sons she had born Philip to succeed him and sent a letter to Henry I asking him to arrest her stepson Louis.  Why Henry I should be involved in this isn’t explained.  Orderic claimed too that Bertrade tried to kill her stepson Louis first through the arts of sorcery, and then through poison.  Her attempts, if there is any truth in them, didn’t work because Louis succeeded his father in 1108 and Bertrade did not die until 1117. William of Malmsbury tells us that  "Bertrade, still young and beautiful, took the veil at Fontevraud Abbey, always charming to men, pleasing to God, and like an angel."   If she did go to Fontevraud, then she must have known the self-exiled wives of William IX of Aquitaine too – what an enclave that must have been!   Bertrade’s son from her first marriage was Fulke V, father of Geoffrey le Bel, and grandfather of Henry II.

Meanwhile, another scandal bubbling under in French royal and allied circles, involved the sister of Louis VI, Constance, who was Louis VII’s aunt.   She was married to Hugh, Count of Troyes, and bore him a son baptised Eudes.  However, Hugh believed himself impotent and contested the paternity of the child, declared him illegitmate, and instead made his nephew Theobald of Blois his heir.  Hugh and Constance’s marriage was dissolved and she went on to marry Bohemond of Antioch and departed for a life in the Middle East.  Deluded husband?  Unfaithful wife?  Who knows?

Which all goes to show that Alienor was not the only one with skeletons in her family cupboard and her husband Louis’ background was every bit as colourful as her own.  Not that you find biographers making much mention or calling Louis out on his ancestors!
Posted by Elizabeth Chadwick at 11:51