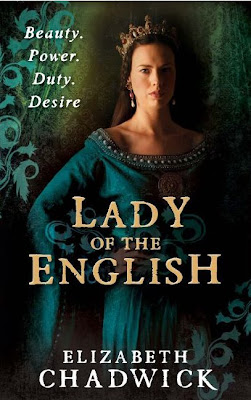 Well, it's very early days as LADY OF THE ENGLISH has not yet gone out to a lot of ARC readers, (maps aren't complete for a start I know) but this very early review arrived in my in box this morning. This review isn't officially out for a couple of days yet, but as with many things online, it's ahead of the event, so I'm posting here as a (nice) starter!

I have included the url but it will change frequently because it's to a 'Review of the Day' and LOTE will not always be there. http://www.newbooksmag.com/left-menu/books/review-of-the-day.php I've included the text below for quick ref and for when the url changes title.

It's featured in NewBooks Magazine: The Magazine for Readers and Reading Groups.

Review of the Day:
Lady of the English

Lady of the English is set in the 1100's, and follows the lives of two very different women, Matilda and Adeliza.

Matilda, the only daughter of Henry I, was used as a political pawn for all of her life. As a young child she was married to the Holy Roman Emperor, Henry V, until his death in 1125 resulted in her father using her again to make a political marriage, this time with the Count of Anjou. Following the untimely death of her brother William, Matilda was regarded by some of the English barons as the rightful heir to the English crown. However, after the death of her father, the succession was insecure, and Matilda’s life became one long battle to regain, and maintain what was rightfully hers from Stephen, the usurper King. Adeliza of Louvain was the second queen of Henry I, and Matilda's stepmother. Little is known of her historically other than she did not produce the male heir Henry I needed for a safe succession.

This is a meticulously researched historical novel with great insight into both female lead characters. Elizabeth Chadwick has cleverly juxtaposed the lives of these two fascinating women, and brought the medieval world to life in such a believable way, that you feel the tension and experience the struggle, not just for supremacy, but for survival. To be a woman in a medieval world was to be subjected to the whim of men – and only the strongest women made a difference.

Elizabeth Chadwick is a master of medieval storytelling, her sense of history is superb, her characters leap off the page, and enter your life in such a way that the story lives on in your imagination long after the last page.

For reading groups with an interest in historical fiction, this book would be a joy to discuss, and would initiate a lively discussion on the merits of being a woman in a man’s world.

This book looks great! Definitely going to be on my "to be read" list!

Can't wait to read it.
Mathilda, Henry I and William are on my list to draw. :)

This books sounds like such a good one. I am counting the days.

So happy you will have another book soon, love all of your books. This will be my birthday present to myself in June :)

I am looking forward to this one!