Tallying it all up. 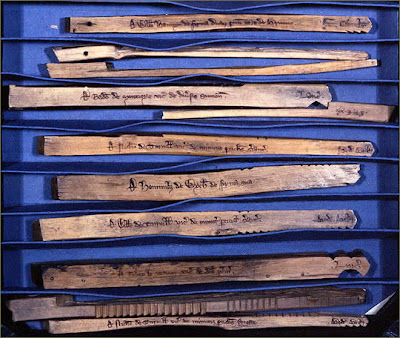 I'm easing myself back into blogging after nearly a month's absence, by talking briefly about tally sticks have been around for many thousands of years. They are a form of record-keeping made by making notches on length of wood or bone. Such items have been found dating back to the early Paeleolithic period.
In the Middle Ages, great use was made of the tally stick to keep records of stocks, supplies, and to deal with monetary matters. They were particularly important at the Exchequer when people came to render payment. Reference is made to them in detail in a 12th century instructional book titled Dialogus de Scaccario - in English the Course of the Exchequer. 'The book explains to an apprentice how the Exchequer was run. Tally sticks at this period were generally made from hazelwood and were originally stored in leather pouches or canvas bags. The Exchequer book says that 'the length of a lawful tally is from the tip of the index finger to the tip of the outstretched thumb. At that distance it has a small hole bored in it. (The hole was used for passing a leather thong through in order to string tallies of the same subject together). A thousand pounds isbut shown by a cut at the top of the tally wide enough to hold the thickness of the palm of the hand, a hundred that of the thumb, twenty pounds that of the little finger, a pound that of a swelling barley corn, I shilling smaller, but enough for the two cuts to make a small notch. A penny is indicated by a single cut without removing any of the wood. On the edge of the tally on which a thousand is cut you may put no other number save the half of a thousand, which is done by halving the cut in like manner and putting it lower. The same rule holds for a hundred, if there is no thousand, and likewise for a score and for 20 shillings which make a pound. But if several thousands, hundreds, or scores of pounds are to be cut, the same rule must be observed, that the largest number is to be cut on the more open edge the tally, that is to say that which is directly before you when the note is made, the smaller on the other. But the larger number is always on the first of the tally, and the smaller on the reverse. There is no single cut signifying a mark of silver: it is shown in shillings and pence. But you should cut a mark of gold as you do a pound, in the middle of the tally. A gold penny that is a besant, is not cut like a silver one; but the notches are cut in the middle of the tally with the knife perpendicular, and not stoping as with a silver one, thus the position of the cut on the tally and the difference in the cutting settles what is gold on what is silver.'

That takes a bit of thinking through, but it makes sense. The notches on the wood were a record of how much had been paid into the the Exchequer. once the notches had been made on the tally stick, the shaft was then split lengthways into two pieces of unequal length, but both pieces had identical notches. The longer piece was known as the stock and was given to the person paying into the Exchequer as a record of how much he had paid. The Exchequer officials retained the shorter piece which was known as the foil. When it came time to audit the accounts, the two pieces were fitted together to see if they would "tally". It's also the origin of our word 'stock exchange.'
Tally sticks were used extensively in the merchant community. men might speak different languages, men might be illiterate, but everyone could understand a tally stick. Their use continued in the exchequer until the the first quarter of the 19th century. In fact tally sticks were responsible for the destruction of the old Houses of Parliament. Old unwanted tally sticks were being burned on a purpose made fire that got out of control and burned down the entire building. Oops! As a result of this, many of the ancient tally records were lost, but a few survived, as witnessed by this photo from the National Archives of some 13th Century examples of the tally stick.
I really think I need to get some of these made for reenactment purposes!

Posted by Elizabeth Chadwick at 21:13

It's so interesting to see the monetary system used during the past centuries. I can imagine John FitzGilbert with his tally sticks at the Exchequer trying to manage income vs. outgo - easier to do during Henry I's time than later!

Also it was interesting to see bits of our current monetary system in use during earlier times.

Thanks for a great article.

I think I need to read this through again. Possibly after another couple of mugs of tea.