Today's research snippet. A chronicler on the marital difficulties of Alienor of Aquitaine and Louis VII 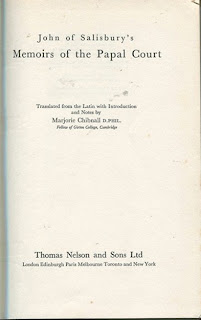 I used the book listed to the left when resarching THE SUMMER QUEEN.  John of Salisbury was one of the more reliable chroniclers of his day. A friend of Thomas Becket, he worked at the papal court and was an eye witness to the 'international' political struggles and scandals of the day. Here is John of Salisbury on the moment when Alienor and Henry came to visit the Pope on their way home from the 2nd crusade. Their marriage was in trouble...

Louis and Alienor were escorted to the Pope's residence at Tusculum.
" The lord pope received him (Louis) with such tenderness and reverence that one would have said he was welcoming an Angel of the lord rather than a mortal man. He reconciled the King and Queen, after hearing severally the accounts each gave of the estrangement begun at Antioch, and forbade any future mention of their consanguinity: confirming their marriage, both orally and in writing, he commanded under pain of anathema that no word should be spoken against it and that it should not be dissolved under any pretext what ever.
This ruling plainly delighted the King, for he loved the Queen passionately, in an almost childish way. The Pope made them sleep in the same bed, which he had decked with priceless hangings of his own; and daily during their brief visit (2 days) he strove by friendly conversation to restore love between them. He heaped gifts upon them; and when the moment came for departure, though he was a stern man, he could not hold back his tears, but sent them on their way blessing them and the kingdom of the Franks, which was higher in his esteem than all the kingdoms of the world.'

So what happened in Antioch you might ask? John of Salisbury has this to say:
in the year of grace 1149 the most Christian king of the Franks reached Antioch, after the destruction of his armies in the East, and was nobly entertained there by Prince Raymond, brother of the late William, Count of Poitiers. He was as it happens the Queen's uncle, and owed to the King loyalty, affection and respect for many reasons. But whilst they remained there to console, heal and revive the survivors from the wreck of the Army, the attention that was paid by the Prince to the Queen, and his constant, indeed almost continuous, conversation with her, aroused to the King's suspicions. These were greatly strengthened when the Queen wished to remain behind, although the King was preparing to leave, and the Prince made every effort to keep her, if the King would give his consent.
And when the King made haste to tear her way, she mentioned their kinship, saying it was not lawful for them to remain together as man and wife, since they were related in the fourth and fifth degrees. Even before their departure a rumour to that effect had been heard in France, where the late Bartholomew Bishop of Laon had calculated the degree of kinship; but it was not certain whether the reckoning was true or false.
At this the King was deeply moved; and although he loved the Queen almost beyond reason he consented to divorce her if his councillors and the French nobility would allow it. There was one knight amongst the King's secretaries, called Terricus Gualerancius (Thierry Galeran), a eunuch whom the Queen had always hated and mocked, but who was faithful and had the King's ear like his father's before him. He boldly persuaded the King not to suffer her to dally longer at Antioch, both because 'guilt under kinship's disguisse could lie concealed' and because it would be a lasting shame to the kingdom of the Franks if in addition to all the other disasters it was reported that the King had been deserted by his wife, or robbed of her. So he argued, either because he hated the Queen or because he really believed it, moved perchance by widespread rumour. In consequence she was torn away and forced to leave for Jerusalem with the King; and their mutual anger growing greater, the wound remained, hide it as best they might.'

You'll have to wait for THE SUMMER QUEEN to see what I make of it all! Although I have written a blog post about the Antioch incident. here http://livingthehistoryelizabethchadwick.blogspot.co.uk/2012/07/eleanor-of-aquitaine-raymond-of.html

Today's research photo is of The Becket Casket circa 1180.  Gilded copper and Champleve enamel on a wooden core.  At the time of its creation it may have housed relics of Becket's martyrdom. 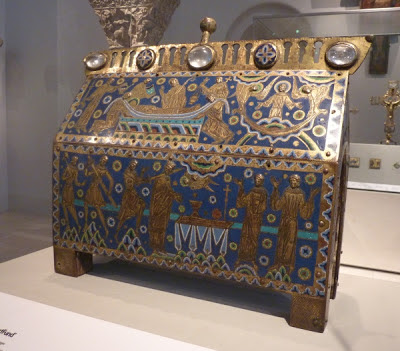 Posted by Elizabeth Chadwick at 12:46