Today's research snippet. A Description of Henry I

A description of Henry I by William of Malmsbury. I think he's an interesting king and although he doesn't receive the same attention of his grandson Henry II, I think he was his equal at least.

He was of middle stature, exceeding the diminutive, but exceeded by the very tall; his hair was black, and set back on the forehead; his eyes  mildly bright; his chest brawny; his body fleshy.  He was facetious in proper season, nor did multiplicity of business cause him to be less pleasant when he mixed in society…  He preferred contending by council rather than by the sword: if he could, he conquered without bloodshed; if it was unavoidable, with as little as possible.  Throughout his life he was wholly free from impure desires, for as we have learned from those who are well informed, he partook of female blandishments, not for the gratification of incontinency but for the sake of the issue; nor condescended to casual intercourse, unless where it might produce that effect: in this respect he was the master of his natural inclinations, not the passive slave of lust.  He was plain in his diet, rather than surfeiting himself by a variety of delicacies.  He never drank but to allay thirst, execrating the least departure from temperance, both in himself and those about him.  His sleep was heavy, and interrupted by frequent snoring.  His eloquence was rather unpremeditated than laboured; not rapid, but deliberate.
He was active in providing what would be beneficial to his empire; firm in defending it; abstinent from war, as far as he could with honour; but when he had determined no longer to forbear, he became a most severe requitor of injuries, dissipating every opposing danger by the energy of his courage; constant in enmity, or in affection towards all, giving too much indulgence to the tide of anger in the one, gratifying his royal magnanimity on the other; for he depressed his enemies even to ruin, and exalted his friends and attendants to an enviable condition.
Inflexible in the administration of justice, he ruled the people with moderation, the nobility with condescension.  Seeking after robbers and counterfeiters with the greatest diligence, and punishing them when discovered; neither was he by any means negligent in matters of lesser importance.  When he heard that the tradesmen refused broken money, though of good silver, he commanded all of it to be broken or cut in pieces.  The measures of his own arm was applied to correct the false ell of alltraders, and he made that the standard throughout England.  He made a regulation for the followers of his court, at whichever of his possessions he might be resident, stating what they should accept without payment from the country folk, and how much, and at what price, they should purchase, punishing the transgressors by a heavy pecuniary fine, or loss of life. In the beginning of his reign, that he might awe the delinquents by the terror of example, he was more inclined to punish by deprivation of limb, afterwards by fines.  Thus in consequence of the rectitude of his conduct, as is natural to man, he was feared by the nobility and beloved by the common people.

Today's photo: The Imperial crown of the Holy Roman empire dating to the late 10th and early 11th centuries. 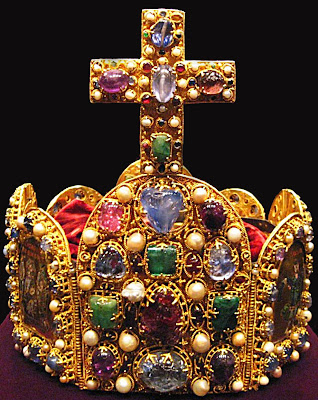 Posted by Elizabeth Chadwick at 12:57