Bad Language.
So, we all know what constitutes swearing today, but what did a Medieval person say when they reached for an expletive? Societies tend to swear by things that are taboo or disgusting in their society, the usual subjects being religeon, scatology and sex.
Chronicler Daniel of Beccles writing in his work Urbanus Magnus in the late 12th century gave a list of swear words not to use including 'Do not swear by Christ's advent, birth, passion, body, brain, bowels, beard, tomb, ears, feet, arms, legs, back...by God's temple, voice, stomach, tongue... Most body parts were up for grabs. Henry II was renowned for swearing 'By God's eyes' and Richard I is known to have sworn by 'God's throat'. He also swore on his soul 'Par mon chief'. John is recorded as having sworn 'by God's teeth.' Gerald of Wales compares the kings of France favourably with the English ones (he was having a down on the Angevins at the time) by saying that they only swore by the saints of France and didn't go in for swearing by 'God's death, eyes, feet, teeth, throat or tumours.' William the Conqueror was accustomed to swearing 'By the resurrection and splendour of God.' William Rufus' favourite oath was 'By the Face of Lucca' (more on that another time) and Henry I's 'By God's death.' King Stephen apparently used 'By God's face.'
As well as religious insults there were the personal ones. One might insult someone by calling them a 'bricon' (fool) or a fils or fille de bas (bastard), or a puterelle (whore). You might refer to someone as stupid (coille) which has to do with testicles, or make mention of a loingoinge (cesspool or latrine). As in life today, there were grades of insults one could hurl at someone, and words that were ruder than others. This short, excellent article by Gillian Polack is excellent and lists a few of them with their gradations.
In current society we seem more concerned with the sexual insult (often sexually degrading particularly to women) and the scatalogical, perhaps because to the broad spread of society, religeon doesn't have the same importance it used to.
http://www.triviumpublishing.com/articles/fightingwords.html 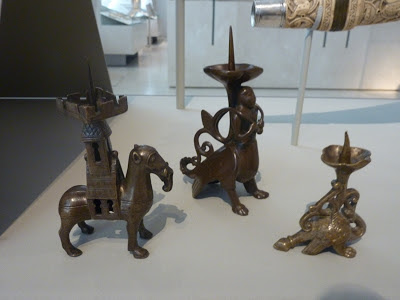 Posted by Elizabeth Chadwick at 11:36